Historical record of the Académie d'Architecture

Created in 1840 as the Société Centrale des Architectes, l'Académie d'Architecture is a cultural institution made up of a selected number of French architects. The Académie aims to promote high standards of architecture and living conditions, encourage teaching and assist members of the building professions.

The legal statute of the Académie is 'association of public interest' in the terms of the French law of 1901. It is completely independent regarding recruitment, activities and finance.

L'Académie d'Architecture does not bear responsibility for the professional concerns of architects, which fall within the province of the 'Ordre', Trades Unions and other organisations set up to this effect. The predecessor of the Académie, the Société Centrale des Architectes, had wider ranging powers. Founded in the mid 19th Century the main purpose of the Société was organising the architectural profession at a time when its statute was not clearly defined. During this period, marked by intense building activity linked to industrial and technical development, the Société Centrale's main concern was defining the nature and vocation of the architect as both artist and qualified technician, independent of all commercial considerations, thus distinguishing him from the engineer and the contractor.

For one hundred years the organisation's work focused on numerous activities : organisation and the curriculum of architectural teaching in the workshops of the Ecole des Beaux Arts, the recognition of a national State diploma permitting the use of the qualification of architect, the organisation of lectures and international congresses which lead up to the creation of the Union Internationale des Architectes.

The Société published the review 'L'Architecture' (1888 - 1940) and after 1883 the Série Centrale des Prix des travaux de bâtiment (1), the award of a quality label for new materials and building methods, awarded numerous prizes grants and medallions to those involved in construction work to encourage high quality work. The Société also fixed a code of professional conduct and created the 'Ordre'.

After attaining most of the goals it had set itself the Société Centrale, whose members included France's most outstanding architects, was changed into the Académie d'Architecture in 1953.

More selective than its predecessor - the number of members was limited to one hundred - the Académie concentrated its efforts on the teaching and promotion of high standards of architecture and urban development ; the study of fair building costs through the continued publication of the Série des Prix (now in its 33rd edition) ; publication of works, organising lectures and conferences in architecture and urbanism ; helping the training of young architects by giving prizes and grants ; preserving and developing a large stock of archives and original drawings, thus contributing to the knowledge of the history of architecture and architects.

The hed office of the Académie d'Architecture is in the former hôtel de Chaulnes, one of the most famous old town houses on the place des Vosges in the Marais district of Paris.

Thanks to the competence of its members and the wide variety of its activities, the Académie is well qualified to give its opinion on all questions concerning the development of the architectural environment. 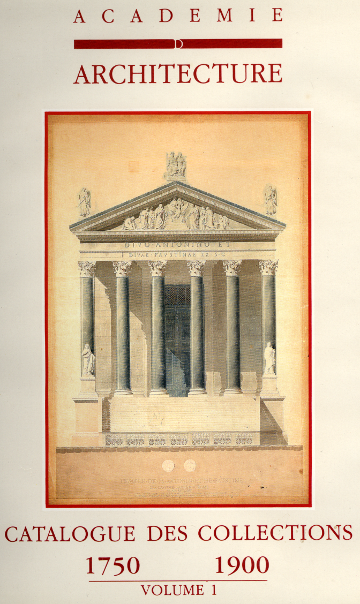